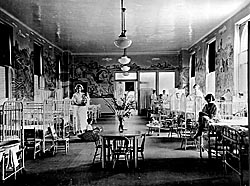 Anton Refregier’s first mural assignment under the Works Progress Administration’s Federal Art Project (WPA-FAP) in the 1930s was to paint a mural for the children’s ward at Greenpoint Hospital in Brooklyn. Joining the WPA rolls allowed him to get off relief. He was paid $23.86 a week and was assisted by five other WPA artists. In an interview conducted for the Archives of American Art Refregier stresses that although he was assigned to be the leader of the mural project, the group decided to undertake the project cooperatively which was more in line with their values. In an interview for the Archives of American Art’s New Deal and the Arts Oral History Project Refregier explains:

“The Left was very powerful at that time the really moving force. The idea of cooperative concepts was in the air…. And we did it. It was of course easy because this was a children’s ward, a large wall divided with a number of windows so we were able to take the comparatively easy way out by assigning each one to a particular space between two windows. The only unifying force was the element above the windows and the color scheme and general pattern, which I decided, because I was in charge of the project, and responsible to the government for its The way we worked, was very interesting. I suggested we all solve the design individually and we all agreed we would take two weeks each, and each one of us would design the wall. Then we would have a conference and, collectively, we would select the best passages, incorporate them in one overall design which I would pull together with respect for everybody’s contribution. And it worked out very well. It didn’t infringe on the liberty of any one individual. It was a good job. I think it took us about a year or so to do it.