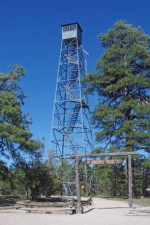 “Grandview Lookout Tower stands over 80 feet in height. The tower was constructed by the Civilian Conservation Corps in 1936 in order to locate forest fires in their early stages of development. The tower is part of a series of fire watch structures including Kendrick Mountain and Bill Williams Mountain lookouts that survey the northern portion of the Kaibab National Forest. The tower is still staffed today during fire months in the summer and is open to visitors during that time. The view from the top includes a large portion of the Grand Canyon and nearby San Francisco Peaks and is, quite literally, breathtaking.”