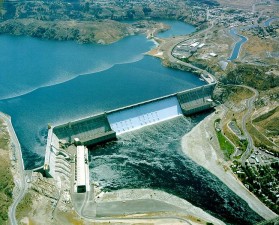 The idea for the dam was originally proposed by William M. Clapp in 1917. Feasibility studies were performed in the 1920s, and a final report in favor of the dam was presented to Congress in 1931, but work on the dam did not begin until President Franklin D. Roosevelt promised federal support in 1933. The Public Works Administration began work on the dam in 1934.

“Grand Coulee Dam is a gravity dam on the Columbia River in the U.S. state of Washington built to produce hydroelectric power and provide irrigation. It was constructed between 1933 and 1942, originally with two power plants. A third power station was completed in 1974 to increase its energy production. It is the largest electric power-producing facility in the United States[3] and one of the largest concrete structures in the world…

After visiting the construction site in August 1934, President Franklin Delano Roosevelt began endorsing the “high dam” design which, at 550 ft (168 m) high, would provide enough electricity to pump water to irrigate the Columbia Basin. The high dam was approved by Congress in 1935 and completed in 1942; the first water over-topped its spillway on June 1 of that year…

Roosevelt envisioned the dam would fit into his New Deal under the Public Works Administration; it would create jobs, farming opportunities and would pay for itself. In addition, as part of a larger public effort, Roosevelt wanted to keep electricity prices low by limiting private ownership of utility companies, which could charge high prices for energy.[17] Many opposed a federal takeover of the project, including its most prominent supporters, but Washington State lacked the resources to fully realize the project.[33][34] In August 1935, with the help of Roosevelt and a Supreme Court decision allowing the acquisition of public land and Indian Reservations, Congress authorized funding for the upgraded high dam under the 1935 River and Harbors Act.”

Woody Guthrie, who loved the Pacific Northwest, was hired by the federal government and the Bonneville Power Administration to compose several songs about the Bonneville and Grand Coulee Dams: “To Woody, poet of the rain-starved Dust Bowl, this mighty stream of cool, clear water, coursing through evergreen forests, verdant meadows, and high deserts was like a vision of paradise. He saw the majestic Grand Coulee Dam as the creation of the common man to harness the river for the common good – work for the jobless, power to ease household tasks, power to strengthen Uncle Sam in his fight against world fascism.”