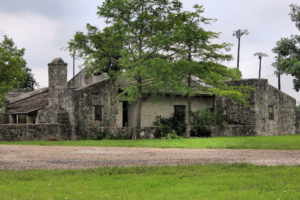 The Civilian Conservation Corps (CCC) Company 3822(V) was assigned to Goliad, Texas from 1935 to 1941 to work on project SP 43-T, Goliad State Park. The CCC built a custodian’s complex for Goliad State Park between 1936 and 1937. The complex consisted of a five-room, one-bath, 1-1/2 story residence for the park caretaker, plus maintenance and storage buildings, all located about one mile north of the park. A stone wall surrounded the complex. The CCC built most everything in the house by hand as the house was also an experimental studio, testing the methods they would use to reconstruct Mission Espíritu Santo in Goliad State Park. The tile was fired in a kiln on site in the park. Hinges on the doors were made in the metal shop at the CCC camp.

The house is a contributing structure to the Goliad State Park Historic District. The district was listed on the National Register of Historic Places on March 12, 2001. The custodian’s house is being renovated and will serve as a new visitors center for the El Camino Real de los Tejas National Historic Trail.

Project originally submitted by Larry Moore on May 2, 2018.