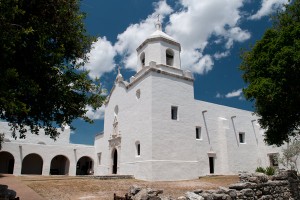 This Texas state park was established to preserve a Spanish mission and commemorate historic events in Texas history. A marker at the site explains the CCC’s involvement in the park’s development:

“Mississippi native and Goliad County Judge James Arthur White (1878-1953) possessed a fervent interest in Texas history, notably that of his adopted city of Goliad. He began in 1928 to organize support for a state park to protect Goliad’s many significant historic sites. Judge White drafted a bill in 1931 to create the park and a state-funded bridge and highway (later U.S. 183). Despite the bleak financial prospects of the Depression era, Judge White secured funding and labor from the Federal Civil Works Administration in 1933. When funds were expended by 1934, White applied to the Civilian Conservation Corps (CCC) program. Preliminary study of the site began in March 1935. Forty cottages, each to house six men, were constructed in May. The first CCC enrollees to arrive were veterans of the Spanish American War, the Boxer Rebellion in China and World war I. They had their own newspaper, “The Goliad Veteran,” and their evening schedules included an extensive educational program. Historians and architects traveled the U. S. and Mexico researching Spanish colonial mission architecture. Supervised by National Park Service architects and local craftsmen, the CCC workers ultimately reconstructed a school-workshop, church and granary at Mission Espiritu Santo and also erected maintenance and shop buildings, a latrine, custodian’s lodge, museum and administration building and developed a state park road and picnic facilities. Judge White served on the Texas Centennial Commission, and through his influence Goliad received $100,000 in state and federal funds for Memorial Auditorium (1937) and a burial monument for Col. J. W. Fannin and his men (1939). The CCC camp was closed by June 1941 due to the threat of World War II.”   (https://atlas.thc.state.tx.us)