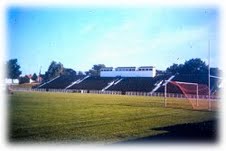 "One regional example of these structures is the Vineland High School Stadium, built by the WPA and dedicated in October 1938. It was soon after renamed Gittone Memorial Field in honor of Harry A. Gittone, proponent of local scholastic sports programs.

Gittone Stadium was planned as part of the Vineland High School campus in 1926 when land was acquired, extending the school grounds south to Montrose Street. For the next ten years, improvements to the field continued and it was used for physical training and track. Football games were held at Landis Park until 1938. in 1930, a state championship win by Vineland's gridiron squad raised the town's interest in high school football to a fever pitch. Jack Penino, director of athletics, pushed hard for funding to complete Gittone Stadium. Ticket booths were constructed at each gate and revenues from paid admissions climbed steadily. 1933 saw the addition of a scoreboard. In 1934, temporary bleachers were installed. By 1936, with public demand for a stadium growing, private donations and federal funding finally amounted to enough to complete the stadium. Since then, Vineland has used the stadium for football games and graduations. Landis School students, and community organizations also use the field.

Gittone Stadium, constructed by the WPA in 1934, is a regional example of a stadium constructed as part of an academic complex. The design of the stadium is based on the materials of its construction and function, rather than of any particular architectural style, typical of many WPA projects. The stadium complex is comprised of concrete masonry walls on the west, north, and east sides and the grandstands and press box at the south side. The concrete structure of the grandstands is approximately one story, topped with the single story press box above the main exterior (south) facade.

Location notes:
Originally built for the Vineland High School campus, later renamed the Landis School. It is still used by both the school and local community organizations.