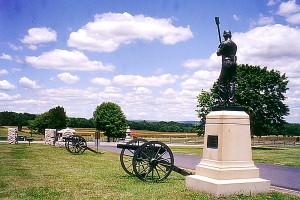 According to Jim Campi, director of policy and communications at the Civil War Trust, “During the Depression, the Gettysburg Battlefield benefitted from a New Deal Civilian Conservation Corps (CCC) program. The park hosted two CCC camps—one in the Pitzer Woods named Camp Renaissance and another in the McMillan Woods that ultimately became one of the few all-African American camps in the CCC system. These young men performed considerable improvements to the park, installing trails, fences, roads, and utility lines. The CCC also reconstructed the XII Corps earthworks on Culp’s Hill and provided manpower for the 75th anniversary commemoration of the battle in 1938.”