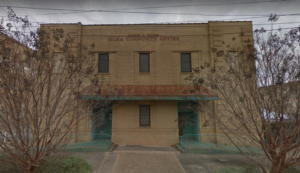 The history of this building is tied very closely with the two people involved in the passage of the most significant legislation of the Civil Rights Movement, the 1965 Voting Rights Act, Samuel Boynton, and Amelia Pitts Boynton Robinson.

Samuel Boynton, Charles J. Adams, and others successfully lobbied the federal government for some New Deal money to be used to build a community center in Selma. Boynton had advocated for years for a public restroom facility for African Americans near downtown Selma. Jim Crow laws prevented African Americans from using any of the store facilities including restrooms, lunch counters, and other amenities. Boynton and Adams saw a need for a place for African Americans to use the bathroom and rest, especially for people who traveled from outer Dallas County and surrounding counties to shop in Selma. White Selma leaders did not take the African American proposal seriously. It was not until a white minister, Dr. E. W. Gamble of St. Paul’s Episcopal Church (extant), took on the cause that the project gained traction with the white leaders in Selma. At the same time, Boynton traveled to Washington, D.C. and won Selma a $40,000 grant from the Works Progress Administration for construction of the building. Local funding was provided via the performance of a play written by Amelia Robinson, “Through The Years”, about her ancestor, the Reconstruction Congressman Thomas Smalls who rose from slavery through fighting in the Civil War. The city of Selma donated the land on Franklin Street between Alabama Avenue and Water Street, across the street from the Sullivan Building, a key African American commercial and professional landmark in the downtown business district. The Colored Community Center, now called the George Wilson Building (extant), housed restrooms, an auditorium, and office space for agricultural extension workers. Amelia and her husband, S.W. Boynton, fought for voting rights and property ownership for African-Americans in the poorest rural areas of Alabama, where she worked as Home Demonstration Agent for the U.S. Department of Agriculture, and he as County Agent. The second floor of the building featured murals painted by Felix Gaines. The building was finished in 1937. Amelia Pitts Boynton observed: “it was once the pride of south-central Alabama, where all of the big bands like Duke Ellington, Earl Hines, Nat King Cole, Fats Domino and others came to play for the black servicemen from Craig Air Force Base.” The building thus became a cultural intersection between outsiders, Selma residents, and the black military.

The two murals painted by Felix Benjamen Gaines (1908–1991) are currently on display in the Old Depot Museum. One depicts a black sharecropper and the agricultural products of the area that resulted in George Washington Carvers breakthroughs in agriculture and the other is an alegory of the Negro Spiritual “Goin’ Home” written by Harry Burleigh.