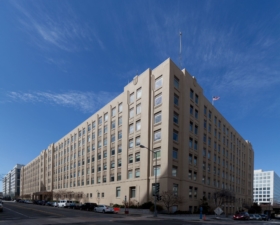 The eastern half of the former General Services Administration Regional National Capital Office Building was built under the New Deal in 1933-35.   The Public Works Administration (PWA) contributed $1,750,000 towards the project and the Treasury Department paid the rest, $850,000.

The purpose of the expansion was to add ~400,000 square feet of space for a consolidated home of the Treasury Department’s Procurement Division, whose workers had been spread out across several buildings in the District.

Originally meant to be an addition to the Procurement Division’s building across 8th Street to the west, completed in 1932, the addition was simply integrated into the earlier building to be make one giant, square block, eliminating the former 8th Street.  Overall, the building is a seven-story structure in Moderne style, with bays for better natural lighting.  There is a warehouse at the center and offices around the edges. The design was undoubtedly by the Procurement Division’s own Office of the Architect under Louis Simon and construction was carried out by the firm of John McShain builders, which had put up several federal buildings during the New Deal.

The Treasury Department had built and operated all federal, non-military buildings since the presidency of George Washington. In 1933, at the outset of the Franklin Roosevelt Administration, a new Procurement Division was created within Treasury to handle federal construction.  In 1939, that function passed to a new Federal Works Agency and in 1949 to the newly-created General Services Administration (GSA), where it remains to this day.

The GSA used the Procurement Division Building as its Regional National Capital Offices until they moved out in December 2019.  Its future is unknown as of this time (2020).  The building has been nominated for inclusion on the National Register of Historic Places.

The 1942 WPA Guide to Washington DC described the Procurement Division building and the new annex in detail:

“The huge white-painted concrete structure of the Procurement Division of the Treasury, occupying two blocks between 7th and 9th and C and D Streets SW, is composed of two seven-story buildings of modern structural design, joined together and functioning as a single unit. The Main Building, with tunnel and railroad siding, was constructed in 1932, and the Annex, with light bays for the convenience of Treasury architects, was completed in 1935, at a total cost of $2,600,000. The interior of the building is used as a warehouse and the outer shell is occupied by offices.

In the main lobby, 7th Street entrance, murals [by Harold Weston and the Treasury Relief Art Project] illustrate the work of this central Government purchasing agency, including the drawing of architectural plans, the buying of materials, and the supervising of Federal buildings under construction. The library of the Supervising Architect (open to serious students), sixth floor, south side, contains photographs of buildings and construction processes, architectural plans and blue prints, technical books and periodicals. Eight rooms on the fifth floor, each finished in a different type of material, ranging from metals to plastics, exhibit a great variety of building materials and their uses. Here are displayed tiles, bricks, building stones, woods, lighting methods, casement and sash windows, chromium and nickel decorations, engravings on glass, and plastics in polychrome, to mention only a few. In the corridors of the fourth floor, the Art Branch exhibits paintings available for hanging in public buildings.” 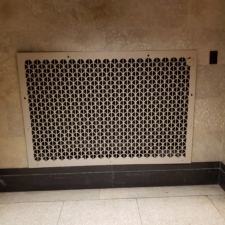 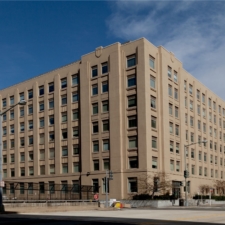 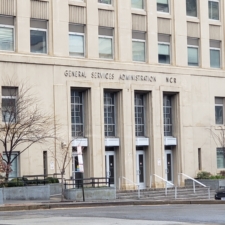 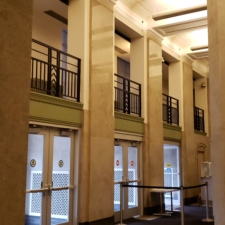 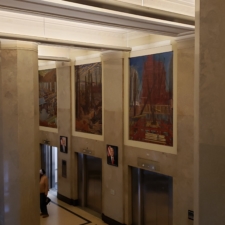 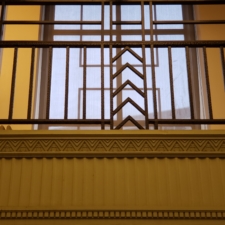 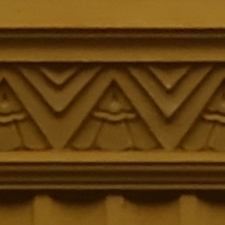 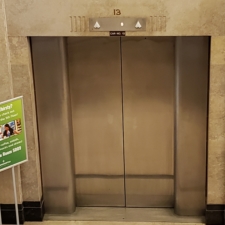