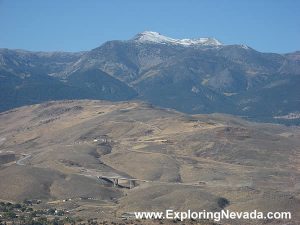 The New Geiger Grade road, Highway 341, was constructed in 1936 by the Federal Works Progress Administration (WPA). The improvements involved widening the old Geiger Grade Road, and bypassing its sharpest turns and steepest grades. This made the road considerably safer and it also made the road automobile friendly.

The old Geiger Grade road that the new highway replaced, was built in 1862 in order to haul silver ore from the Comstock Lode. The road is named for Dr. Davison M. Geiger who, together with J.H. Tilton, financed the road’s construction in order to develop a northern route between Virginia City and Truckee Meadows (Online Nevada Encyclopedia).

The Nevada Online Encyclopedia explains that prior to the WPA improvements, the road’s “sharp descent, including hairpin turns and steep slopes, made it impractical for heavy loads, but it was a popular route for stagecoaches. Because drivers had to slow in some places, these became favorite locations for robberies.”

“Concord stages, mud wagons, and ten-mule freighters carried thousands of passengers and millions of dollars in precious cargo across this section of the Virginia Range. There are many stories of unpredictable winds, snows, landslides, and the everlasting danger of lurking highwaymen involving this precipitous stretch of road.”

The 1940 guidebook, Nevada: A Guide to the Silver State, commissioned by the WPA Federal Writers’ Project writes that

“”Whereas the old Geiger Grade road had steep stretches that taxed the ability of even the best motor cars, the new Geiger Grade can be driven to the top in high gear. The foothills are dotted with second-growth juniper. Mile after mile the road climbs, offering many broad views of the valley with the magnificent Sierras beyond in the west.”

In their book entitled Building Nevada’s Highways (2015), Jennifer E. Riddle and Elizabeth Dickey assert that the reconstruction of Geiger Grade in 1936 “was the biggest engineering achievement of the Highway Department.”