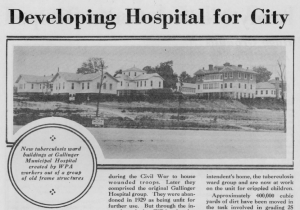 , Source The Library of Congress

The original Gallinger Hospital dates back to 1846, when the hospital was first located on the banks of the Anacostia River. The hospital moved to this site during the Civil War, with frame buildings meant to house wounded soldiers and more structures were added in 1923.  The hospital was abandoned in 1929, but the Works Progress Administration (WPA) rehabilitated the old complex in 1935-1936 for use as tuberculosis, child disability, psychiatric, and venereal disease wards.

Work: A Journal of Progress reported:

“The 45 buildings at Gallinger Hospital cover 65 acres. Under current appropriations funds have been allotted to permit the hiring of but one painter for the entire group of buildings. WPA has maintained a large force of painters at the institution continuously. They have completed painting the interior of the 6-story main building, the main central kitchen, dining rooms, diet kitchen, nurses’ home, doctors’ quarters, psychopathic ward buildings, superintendent’s home, the tuberculosis ward group and are now at work on the unit for crippled children

Approximately 400,000 cubic yards of dirt have been moved in the task involved in grading 25 acres at the institution. Beautification of the grounds has been coincident with the grading operations. One hundred and fifty permanent shade trees have been planted and 5,000 shrubs laid out. The grounds have also been seeded.

More than 2,000 feet of new roadway has been constructed. The new roads connect the tuberculosis ward development with the doctors’ quarters, children’s ward building, the laboratory and the morgue. The entire road system has been shifted 30 feet, thereby increasing available parking areas around the various buildings.

One of the most valuable of the numerous WP A enterprises at Gallinger is that involving the layout of a new steam-line system, connecting all buildings with the new central power plant.”

The Federal Works Administration (FWA) and Public Works Administration (PWA) also funded extensive work on the site from 1938 to 1942. In 1938, PWA crews were slated to build a 200-bed tuberculosis ward building, an addition to the nurses home, and a new morgue on the site. In 1942, funds were allotted for the PWA to build a venereal disease ward, and for the FWA to add 105 beds to the facility. As with many archival records, these projects were listed as planned, and we lack definitive evidence of their completion.

The main facility at Gallinger became DC General Hospital after the Second World War.   The brick and wood frame buildings have not survived. Although they were added to the National Register of Historic Places in 1989, demolition took place in 1990. 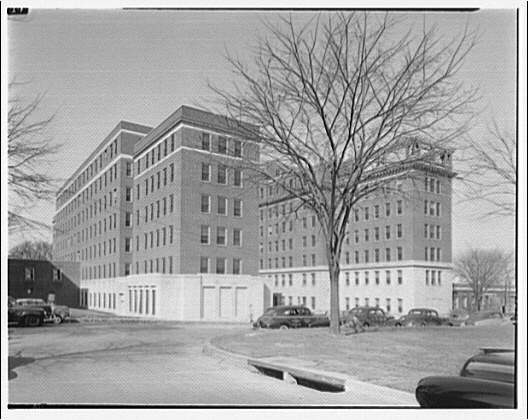