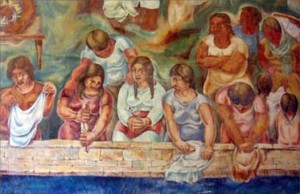 This mural is located in the Louis Plummer Auditorium, at Fullerton Union High School:

“A 75-foot long, 15-foot high mural entitled “Pastoral California”, painted by W.P.A. artist Charles Kassler in 1934, is found on the west side of the building under the arched arcade. A landmark in its own right, the mural is a true “fresco” – a medium rarely used for this type of artwork – that was totally restored through a community effort in 1997, after it had been covered by paint for 56 years.”

It was covered in 1939 because it was deemed “vulgar” and “inappropriate” by the High School District and Junior College Board of Trustees, but was thankfully restored in 1997.

The auditorium itself was built in 1930.