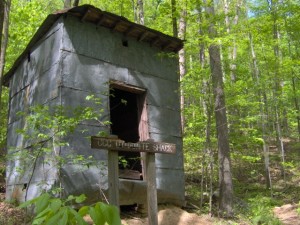 “Frozen Head State Park and Natural Area is a state park in Morgan County, Tennessee, in the southeastern United States. The park, situated in the Crab Orchard Mountains between the city of Wartburg and the community of Petros, contains some of the highest mountains in Tennessee west of the Blue Ridge…

In 1933, Tennessee Governor Harry McAlister set aside a large part of Brushy Mountain State Prison’s lands for the establishment of Morgan State Forest.[3] The Civilian Conservation Corps arrived that same year to construct roads and facilities for forest maintenance. CCC operations continued in the forest until 1941, although rattlesnakes and prison escapes prevented the establishment of a camp within the forest until 1938.”