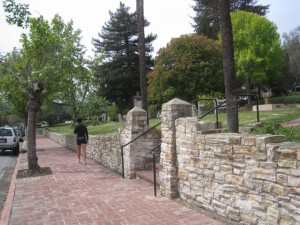 According to Dennis Copeland, archivist and historian for the City of Monterey in the early 2000s, the decorative stone wall around Friendly Plaza in front of historic Colton Hall in Monterey was partly funded by the Public Works Administration (PWA). In addition, The Insider’s Guide to Monterey notes that the brick courtyard was a Works Progress Administration (WPA) project.

Given the common confusion between PWA and WPA, both then and now, our guess is that both projects were undertaken by the WPA and its skilled relief workers.  The PWA normally paid for private contractors to build city halls, courthouses, schools and other civic structures, while the WPA commonly did rock work, street paving and city parks, among other things.