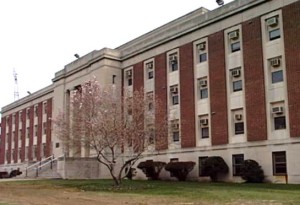 In 1938, the Washington Post reported that the Public Works Administration (PWA) had funds to build a new tuberculosis unit with 150 additional beds at the Freedman’s Hospital site.

The same year, the Works Progress Administration (WPA) also did repairs at the former Freedman’s Hospital in Washington DC.  WPA project cards in the National Archives state that the work to be done was to, “Clean and renovate Freedmen’s Hospital buildings, including cleaning windows, washing walls, floors, woodwork, furnishings and small equipment”.

Freedmen’s Hospital was established in 1862 to serve the thousands of African Americans who came to Washington during the Civil War, seeking their freedom. It was first hospital to provide medical treatment for former slaves.  The hospital was rebuilt at the present site in 1909.

According to the National Library of Medicine, the Johnson Building at 6th and Bryant is the 1909 Freedmen’s Hospital and the site of New Deal work. The original 1862 Freedman’s hospital building also appears to still stand at 13th and R streets.