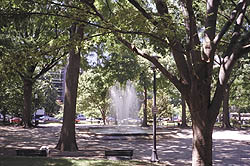 Franklin Park, also known as Franklin Square, was overhauled c. 1935-36.  Work on the park was part of a larger Capital Parks improvement program in the 1930s, funded by the Public Works Administration (PWA) and Works Progress Administration (WPA), assisted by the Civil Work Adminstration (CWA) and Civilian Conservation Corps (CCC).

“By the 1930’s Franklin Park was considered one of the city’s most rundown reservations. Its walks were greatly deteriorated, its lawns overgrown, and its trees unpruned and deteriorating. In spring 1935, planning for the complete rehabilitation of Franklin Park began with the award of a $75,000 grant from the Public Works Administration. Large numbers of trees were planted around the new paved flagstone plaza in the park’s center. A new, essentially symmetrical circulation system was built, consisting of three large elliptical walks encircling the east, west, and center sections of the park. Finally a new oval fountain was constructed with two fountainheads” (http://h-net.msu.edu/).

The labor in this case was probably done by the WPA as part of its million-dollar parks renovation program in 1935-36.

Today, the park looks largely the same today as it did in the late 1930s, though there are continuing discussions about park rehabilitation.