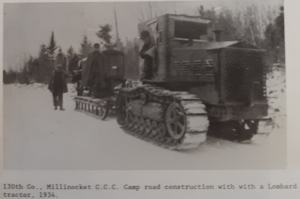 Excerpt from Schlenker, In The Public Interest:

On June 1, 1934, the 130th Co. moved from Alfred to Baxter State Park and Mt. Katahdin. Field work was placed under the State Park Service, and Forestry #SP2 was assigned to this camp.

At Mt. Katahdin, the work was recreational, including the building of trails, camp sites, cabins and dams.

In a newspaper article by Kenneth Fuller Lee, dated October 7, 1934, the significance of the 130th Co. stay at Baxter Park is described.

“Last June the boys of the 130th Co. were sent in from a base camp at Alfred, to establish a new base in the heart of the far-famed Katahdin region, and a site was selected in a field just a few miles beyond the foot of the Hunt Trail.

Double-Top Mountain towers skyward to the westward and on the the north the Katahdin Range rears its peaks to the clouds, the timbered lower slopes scarred by rock-slides offering a sight well worth traveling hundreds of miles to see.

Superintendent H. M. Kenniston is in charge of this camp, and he and his landscape foreman, A.c. Sylvester, planned the work which is now being carried out. Cultural foreman L. MacKechnie and J. Gavin, assisted by G. Bradford, J. Mackie, L. McGoff and P. Pitman, make up the forestry group.

At the foot of the Hunt Trail a large lunch-ground and camp-site is now fast nearing completion. This is located on Katahdin Stream, across which a dam nearly 100 feet in length has been built to form a fine swimming pool. Besides the poo, four Adirondack type log shelters have been erected, each equipped with bunks, tables and fireplaces. There are also six additional table shelters and space has been provided for setting up tents and parking cars at the foot of the trail.

When completed, this will provide ample facilities for nearly a hundred mountain climbers and care has been taken to see that all fire hazards are carefully eliminated. That is the real purpose of the work which is being done in Baxter Park, for a bad fire there would ruin one of Maine’s finest and most valuable assets.

At the outset, the start of the Hunt Trail was moved westward so as to avoid some very wet and unpleasant traveling. On the New trail a bridge had to be built across an 80 foot gorge, and near the bridge another small camp site and shelter was completed. From this point the trail leads nearly five miles over the mountain, being plainly marked and well cleared to give additional fire protection.

The 22 miles of road leading into the camp has been gravelled and smoothed, frequent turn-outs being provided to allow cars to pass each other freely for traffic is heavy in the park even now. In June of this year, 600 men spent nearly a month fighting a serious fire which for a time menaced the entire park area. Abol Field and Togue Pond were within the burned district. Sporting camps as Togue Pond had a narrow escape from the flames. (Editors’ note: 35,400 acres were burned in this fire.)

At Slaughter Pond, in July, the boys of the 130th Company also did excellent service in a fight against the fire which lasted for more than two weeks. Tourists should remember that Katahdin Park, beautiful as it is, is not fireproof! Every precaution is being taken to preserve it for posterity and visitors must abide by the Maine Forest Service rules.

THROUGH ROUTE – At present it is possible to drive over a good, if somewhat narrow road, all the way from Millinocket to Ripogenus Dam, right through the heart of the Park. And Mount Katahdin has always been comparatively inaccessible. Ten years ago, it took three days to get into the mountain, a real feat, too, what with the jouncing buckboards and the boulder-strewn toteroads.

This same distance can now be covered easily and comfortably in one hour from Millinocket and the writer and his wife traveled from the campsite at the foot of the Hunt Trail to Augusta in less than five hours.

But don’t get enthusiastic, Reader, and plan a trip into the Park early next Spring. Rock slides often let go, far up one of the ledge cliffs and come rumbling down, carrying with them hundreds of tons of great boulders. A car that happened to be in the path of one of these slides would be distinctly “out of luck.”

GAME IN THE PARK – The C.C.C. Boys have seen plenty of moose, deer and black bear during their three months stay in there, flocks of ruffled grouse cross the field in front of the speeding trucks, foxes
and bobcats and rabbits are seen almost daily. The Park is a State Game Sanctuary, no firearms or trappings being allowed within its borders.

One of the C.C.C. Enrollees stationed Baxter Park was William Cunningham of Augusta: “I entered the Civilian Conservation Corps in late March or early April in 1933. We were one of the first, if not the first, group to leave Augusta. We went to Ft. Williams in Cape Elizabeth and lived in tents for a week or two, then went to Millinocket, Maine. We worked on the road to Mt. Katahdin, cutting brush and widening the road. We were also part of the beginning of the airport in Millinocket. We did the labor on laying the base for the air strip. Our barracks were on what is now the end of the strip nearest to downtown Millinocket.

It was a very bad winter, and I remember that we shoveled a lot of snow. We had a baseball team and played against the Patten C.C.C. Camp boys several times. We also had a minstrel show in a hall in Millinocket. I don’t remember getting any money from the show so it must have been free to the public. I distinctly recall that the townspeople were very cool towards us when we arrived, but we didn’t cause any problems and were pretty much accepted after a short time. Our service ended July 1, 1934, after only about 15 months. It’s my recollection that we had to leave because of the large number of boys waiting to get in.” 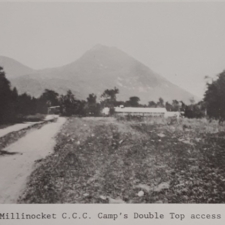 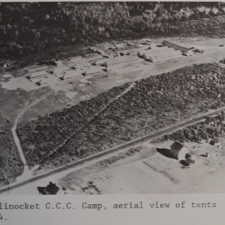 Project originally submitted by Andrew Laverdiere on May 23, 2021.