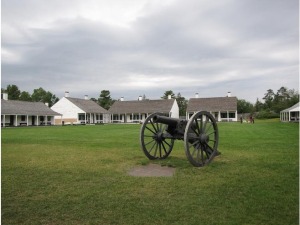 Established in 1844 to protect the government’s interests in the region’s “Copper Boom,” Fort Wilkinson was permanently abandoned by the U.S. Army in 1870 and became a state park in 1923. Beginning in 1938, renovation of the park began under the Works Progress Administration (WPA). The improvements “included a 200 car parking area, upgraded campsites, water and sewer systems, a park store and campground shower building,” as well as historic preservation work that today instruct visitors about conditions on the mid-19th-century frontier. (fortwilkinsha.org.)