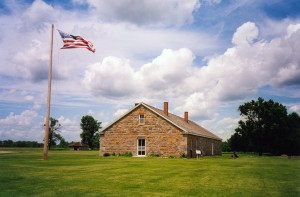 The U.S. Army constructed Fort Ridgely in 1835. It became a state park in 1934 and received significant improvement work from the Civilian Conservation Corps (CCC).

The CCC erected buildings made of local Morton rainbow granite and conducted an archaeological survey, supervised by the Minnesota Historical Society. Based on the survey, Corpsmen helped restore the original fort commissary which became a museum and meeting hall. In all of the state’s parks, “the fort commissary is the only remaining historic reconstruction done by the CCC.”

Location notes: The map indicates the approximate location of CCC improvements in the park.