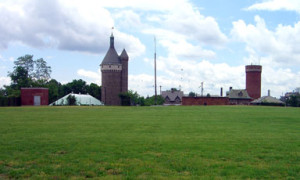 The Public Works Administration (PWA) and Federal Works Administration (FWA) both funded improvements at Fort Reno Park in 1942. In October 1942, the Washington Post reported that the FWA would demolish a 5 million gallon reservoir to construct a 20 million gallon reservoir in its place. PWA work reported by the paper was not specified. The park is no longer a working reservoir.

After WWII, it was a White House Army Signal Agency facility, and it is now best known for hosting a yearly free summer concert series. There are several play fields at the park and it is unknown if the PWA or FWA paid for some of those facilities, as they did at many other parks around the city.