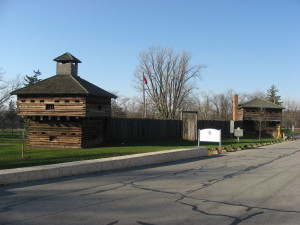 WPA crews rebuilt historic Fort Recovery between 1935 and 1939. The fort was originally built in 1794 on the site where Army General Arthur St. Clair was roundly defeated by the armies of a confederation of Miami and Shawnee Native Americans. The fort was memorialized in 1910, and a museum opened on the site in 1938. From the National Archives file: “They also built, for use as a museum, a replica of the log cabin occupied by General St. Clair on his arrival there in 1791, and in addition constructed a modern library building.”