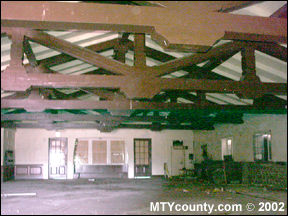 The "tap room" hosted the longest bar on the west coast... This photo shows the enormous timbers that support the tiled roof in the "tap room"

“On 1 July 1940 the 7th Division was activated at what was then known as Camp Ord with General Joseph W. Stilwell (1883 – 1946) in command. Also known as “Vinegar Joe” or “Uncle Joe”, depending upon one’s station in life, General Stilwell conceived a place where those who were rigorously training to put their lives on the line for our country could find respite. A man of action, General Stilwell bull-dogged this project through. He picked the site and assigned the architects: 1st Lieutenant Savo Stoshitch of the 13th Engineer Division and 2nd Lieutenant Orville Pierce, 74th Field Artillery Regiment, with San Francisco architect Henry Rowe consulting. The building was constructed by the U.S. Army Quartermaster Corps, WPA workmen and artists.

The building style is Spanish Mission Revival with a strong Greek Revival influence emanating from Colton Hall (significant as the location of the California Constitutional Convention in September, 1849) and contains approximately 52,000 square feet. The building is divided into a large main ballroom with a balcony above, an adjacent tap room with a bar reputed to be the longest in California, and several smaller meeting rooms. There are magnificent chandeliers, significant murals, some of which were painted by General Stilwell’s daughter Alison, sculpture and 4 huge fireplaces.

The estimated project cost was $500,000, 80% of which was born by contributions from Post Headquarters, Corps Area Headquarters and the WPA. The remaining 20% came from soldiers “voluntary sponsorships”…

Construction began in November, 1940 and was completed on 24 September 1943. There were numerous delays due to wartime material shortages and a cost overrun of $100,000…

…This building epitomizes the role of Fort Ord in our Country’s major wars and is a symbol and living memorial to the 2 million men and women soldiers who passed through Fort Ord in their pursuit of protecting our freedom.”   (https://foaa.csumb.edu/)

Unfortunately, Stilwell Hall was torn down in 2003 and was made part of the California State Park system. Today the site is just an empty site planted with native plants.
(https://www.mtycounty.com)

This photo shows the huge 25ft fireplace in the ball room of Stilwell Hall.

It was the longest bar in California