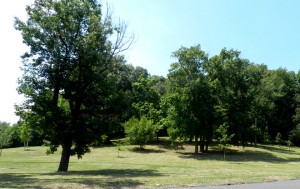 Fort Mahan, in NE Washington DC, was a part of the Civil War defensive ring of forts circling the capital. The site was transformed into a park in the 1930s by the Civilian Conservation Corps (CCC).  The CCC tasked Camp NP-11-DC (National Arboretum) with transforming a hillside site into a picnic grounds.

A HABS Survey Report provides details on the CCC improvements to the park and their current condition:

“… In creating the grounds, the enrollees filled a borrow pit dug to provide fill for other area projects, channeled a spring, cleared trash and dead trees and brush, and graded the entire site.  In terms of amenities, they built a 12′-0″-wide gravel road, one-quarter a mile in length, piped in water, and installed fifteen table-and-bench combinations.  By December 1935, work had begun in earnest, with the table-and-bench combinations an estimated 36 percent complete; the picnic grounds 37 percent complete; and fine grading 34 percent complete.

The 2004 field survey found that, although still cared for, Fort Mahan is no longer maintained as a picnic grounds.  A walkway loops the site, and a stand of trees and a thick understory covers the hillside.  The NPS mows the open space along the ridge of the hill for use as a football or soccer field.  An access road extends westward up the hill from Forty-second Street, NE across from its intersection with Eads Street, NE.  This road is not open for public use.  There is no evidence of picnic tables or water hookup.

The open area of the former picnic grounds probably survives as the present athletic field.  The extant service road might be the original entrance road constructed by the CCC.”

Project originally submitted by Brent McKee - wpatoday.org on May 24, 2013.
Additional contributions by Richard A Walker.