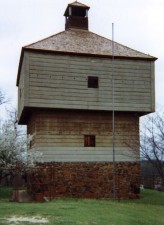 Between 1935 and 1938, the WPA performed structural renovation and historic restoration work at this site. From Wikipedia:

From 1928, the Daughters of the American Revolution and the Macon Kiwanis Club raised funds to create a replica of one of the blockhouses to memorialize the fort. In 1933 the government began archaeological excavations at the Ocmulgee Old Fields, supported by workers and funding of the US Works Progress Administration (WPA) under President Franklin D. Roosevelt during the Great Depression. In 1936, one of the archaeologists, Gordon R. Willey, did enough work at Fort Hawkins to establish the original “footprint” of the southeast blockhouse. Construction of a replica blockhouse was completed as a WPA project in 1938. Some of the original stones were recovered to be used in the basement section. The upper floors were made of concrete formed to simulate the original wood timbers, intended to be more durable at a time of uncertain funding for historic work.