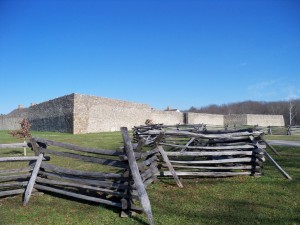 The CCC rebuilt the walls of Fort Frederick, and the fort became a National Historic Landmark in 1974.

“The men of the CCC developed this park by building roads, pavilions, shelters, outdoor grills, restrooms, and more.  They rebuilt the deteriorated walls of Fort Frederick (now a National Historic Landmark) and the barrack foundations inside the fort (the barracks were fully restored in the 1970s).  The park now offers historical reenactments of 18th century life, camping, boating, fishing, and hiking.”