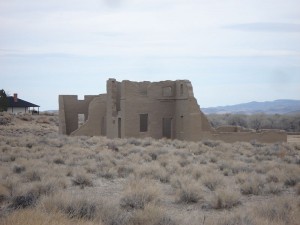 The Civilian Conservation (CCC) helped the National Park Service reconstruct Fort Churchill in the 1930s. Fort Churchill was an 1860s army post built along the Overland Emigrant Trail, which was abandoned in 1869 when its usefulness had passed. Afterward, it fell into ruin.

“On behalf of the Daughters of the American Revolution (DAR), Senator McCarran and Congressman Scrugham secured a CCC camp to restore the historic site. During the summer and fall of 1935, Camp Fort Churchill constructed a campground and a day-use area and built a number of park buildings. Pleased with the restoration and new facilities, the DAR presented the CCC with an American flag in a formal ceremony in June 1935.

The Fort Churchill Project was unique in that it represented the first historic restoration in the state. The park service employed the most competent historical technician available in that vicinity to direct the restoration. The restoration work was performed by Company 590 from northern California and the Midwest. Before the work could begin, the CCC had to manufacture tons of adobe bricks. Making the bricks was a multistage process: the adobe was soaked overnight and placed in a horse-powered pug mill where it was mixed with sand and water. The mixture was poured into handmade molds that produced four bricks at a time. This process went on for days, as tens of thousands of bricks were needed. The making of adobe brick was complicated, and losses were heavy. Bricks made from an incorrect mixture of clay, sand, and straw frequently broke while drying or during handling. Elsewhere, the CCC made three to four times more brick than needed to account for breakage during the reconstruction of Mission La Purisima in Lompoc, California.

Fort Churchill was one of two known Nevada camps to be assigned a camp artist (R.Beaver sketched work scenes at the Wells Siding-Bowman Reservoir Project near Logandale). Elwood Decker, a thirty-one-year-old café artist and muralist from California, captured the various steps of restoration, from brick making to the rebuilding of walls at the fort.”