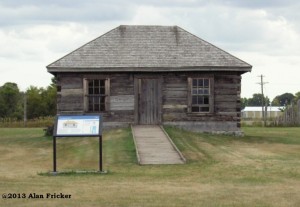 “Fort Abercrombie, in North Dakota [near the town of Wahpeton], was an American fort established by authority of an act of Congress, March 3, 1857. The act allocated twenty-five square miles of land on the Red River in Dakota Territory to be used for a military outpost, but the exact location was left to the discretion of Lieutenant Colonel John J. Abercrombie. The fort was constructed in the year 1858…

The original buildings were either destroyed or sold at public auction when the fort was abandoned, but a Works Progress Administration project in 1939-1940 reconstructed three blockhouses and the stockade (fence) and returned the original military guardhouse to the site. More recent renovations include dismantling the southeast blockhouse and using salvageable materials to renovate the two remaining blockhouses and the guardhouse.”