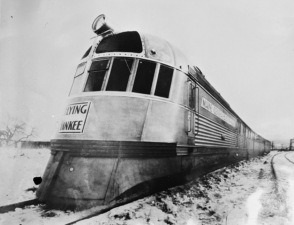 The Flying Yankee’s route started in Portland, Maine and ended in Boston, Massachusetts, and it ran from 1935 to 1957 for the Boston & Maine and Maine Central railroads, sometimes under different names, such as “The Business Man.” When it first arrived on the scene it was viewed as a futuristic, technological wonder, with many innovations. It was lightweight, quiet, economic, capable of 100+ mph, and made of stainless steel. The Flying Yankee was also known for its quick acceleration and deceleration.

The Flying Yankee had “an all electric kitchenette where the food to be served at the seats will be prepared. The buffet is unique in its compactness… It occupies a compartment six feet, six inches long across the center car. In the design of its equipment, great ingenuity has been used to provide all of the necessary facilities, including ample refrigerator space, electric grills, urns for hot water and coffee, storage for dishes, cupboard for storage of foods, utensils, etc.” (Bangor Daily News, February 18, 1935). In addition to standard fare, the Flying Yankee also served ice cream.

Other features of the Flying Yankee included air conditioning, an observation lounge, shatter proof glass, no smoking sections, concealed lighting, and a numbered, reserved seating system for all passengers.

Recalling the train’s history, The Flying Yankee Restoration Group writes: “Was [the Yankee’s route] successful? Yes, beyond expectation. The Railroad had wondered if the new service, between Portland and Boston would draw new passengers or simply carry existing passengers. The train drew new ridership and provided a profit for the Boston and Maine-Maine Central. The running time of the Yankee in 1935 was 51 minutes faster than today’s Downeaster!”

As of early 2022, the Flying Yankee is owned by the State of New Hampshire and appears to be stored at the Plymouth & Lincoln Railroad (also called the Hobo Railroad) in Lincoln, New Hampshire. After many years of work, restoration efforts seem to have stalled due to funding limitations. 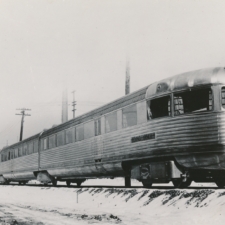 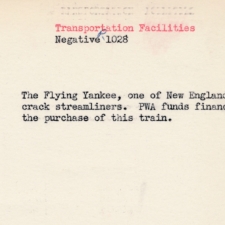 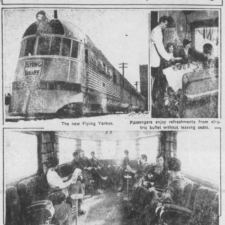