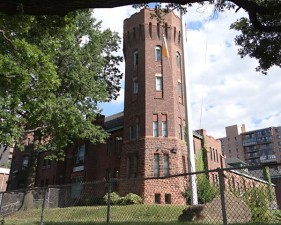 “The Flushing Armory is a historic National Guard armory building located in the Flushing section of the New York City borough of Queens. It is a brick and stone castle-like structure built in 1905–1906, designed to be reminiscent of medieval military structures in Europe. … Throughout the armory’s history it has been used for the National Guard, as a homeless shelter, and a gymnastics center. It is currently used by the New York City Police Department’s Queens North Task Force.”

The WPA provided resources to conduct repairs at the Flushing Armory (14th Infantry Armory) in Flushing during the 1930s.