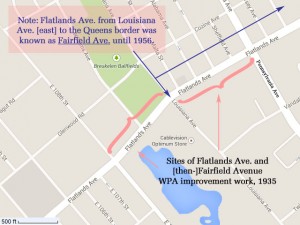 The federal Work Projects Administration put many men to work starting in 1935 with a $197,000 street repair and maintenance project, along what were then dirt roads, throughout the borough of Brooklyn, New York. Roads improved included:

Fairfield Avenue no longer exists as such: a New York City law passed in 1956 changed the name of what was then Fairfield Avenue, which extended from Louisiana Ave. east to the Brooklyn-Queens border, to Flatlands Avenue. (CUNY) Thus, the WPA project in question improved what is now the stretch of Flatlands Avenue from E. 108th St. to Pennsylvania Avenue.