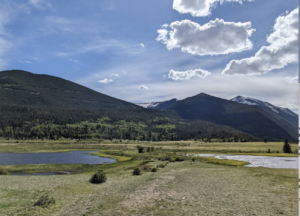 The Civilian Conservation Corps (CCC) was active in Rocky Mountain National Park during the whole of the program’s lifetime, 1933 to 1942.  There were four main camps in the park.

The CCC participated in a fish-restocking program, which the National Park Service had initiated in 1931 to deal with depleted lakes and streams due to years of unregulated fishing.  The main contribution of the CCC was to build four fish-rearing ponds, at Horseshoe Park, near Endovalley campground, at Hollowell Park, and near Grand Lake. The ponds were roughly 200 x 100 feet and 10 feet deep. (Brock, p 42).

Fry from the Estes Park hatchery were placed in the ponds to mature, and once they reached legal size for fishing, CCC enrollees would carry them in waterproof backpacks up to streams and lakes around the park.  Brock observes that, “In the 1930s, the CCC enrollees were the driving force behind this successful fish stocking policy,…[so that] those coming to the Park to sample the fishing would never leave with an empty bucket.” (p. 41)

The state of these ponds today is uncertain. There looks to be one on Fall River in the Endovalley and possibly another at Horseshoe Park (one of today’s Sheep Lakes), both in the northeast quadrant of the park.  There’s no evidence of one in Hollowell Park in the southeast part of the park and it is impossible to pinpoint something as vague as ‘near Grand Lake’; but there are some small ponds in the Kewuneeche Valley that could fit the bill.