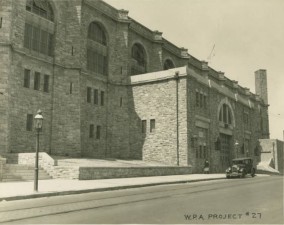 National Register of Historic Places Inventory Nomination Form:
“The Fifth Regiment was the first armory built by the State for the National Guard. … The original structure cost $450,000 to build and had a barrel vault roof over the drill hall floor, which was apparently finished with sheet metal. After a series of damaging fires, the roof and interior of the entire building were completely destroyed by an uncontrollable blaze in 1933. Wyatt and Nolting were recalled to the site to rebuild all but the exterior shell of the first floor and balcony. Operating under tight budget constraints ($1.4 million was allotted for the rebuilding, $750,000 from the State and the balance from the Federal [Emergency] Relief Administration), the architects came forth with the present design which “is not all that could be desired in beauty and perfection of lines but is a compromise with economic handicaps.”