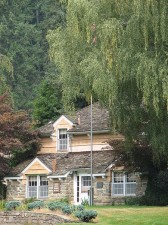 Fenn Ranger Station is part of the Moose Creek Ranger District and located in the Nez Perce National Forest near Kooskia, Idaho. It was built by the CCC between 1936 and 1940.

“Construction of Fenn Ranger Station was fully underway by the fall of 1936. The next year, an administration building, two warehouses, and two garages were completed. By the end of 1938, a cookhouse, gashouse, and one residence had been added. Another residence, a bunkhouse, and a powerhouse were completed in 1939. The barn was built in 1940.”