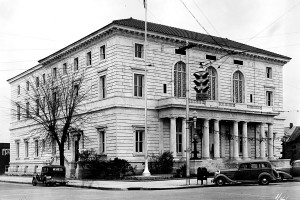 Originally the Gadsden post office, this Beaux-Arts-style building was constructed in 1909. The post office was twice extended, first in 1915 and again, during the New Deal, in 1937. Louis A. Simon was the Supervising Architect of the second extension.

The building was listed on the National Register of Historic Places on June 3, 1976.

The building is still in use by the U.S. District Court for the Northern District of Alabama, and it no longer serves as a post office.