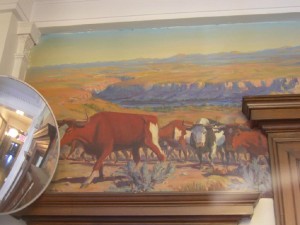 The oil-on-canvas mural entitled “Trailing Cattle” was painted by Leo J. Beaulaurier in 1942. The mural was commissioned as part of a 1940 expansion of the 1914 building.

NRHP: “”The post office also contains a mural at the east end of the original lobby (presently separated from lobby by glass partition). The mural, entitled “Trailing Cattle”, was completed in 1942 by Leo Beaulaurier for a sum of $800. As suggested by the title, the mural depicts a drover and cattle herd stretching across the Montana landscape.

Leo Beaulaurier was in Great Falls, Montana in 1911 and studied at the Los Angeles Art Center. Beaulaurier also completed a mural in the Langdon, N.D. Post Office in 1939. He is listed in the Illustrated Biographical Encyclopedia of Artists of the American West (Samuels, 1976) and is deceased (February 11, 1983 in Great Falls.)”

At the time the mural was painted, the building housed the U.S. Courthouse and Post Office. The building continues to house postal operations, though the mural is located behind glass doors in a section of the building that houses offices for the Department of the Interior’s Inspector General.