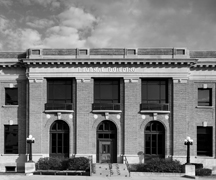 The Federal Building in Grand Island, NE underwent an extension during the early era of the New Deal.

“Supervising Architect of the Treasury James Knox Taylor designed the new post office and federal building in Grand Island, authorizing the final architectural plans in 1908. Workers completed the building, which officially opened on November 26, 1910, at a cost of $108,000. By this time, Grand Island was the third largest city in Nebraska and its economy was thriving.

The building houses federal offices, though it no longer houses postal operations.