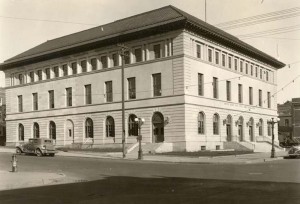 Then the U.S. Post Office and Court House, what is now the Federal Building at 304 E Broadway Ave. was expanded with federal Treasury Department funds during the 1930s. Some landscaping details implemented at that time are still in place, as well.

The federal government constructed this three-story building … in 1913. … Upon completion, the Renaissance Revival-style building housed a Federal Post Office and District Court, one of only four such facilities in North Dakota. A three-story rear wing was added in 1937. The building was nominated to the National Register in 1976.

The U.S. Post Office and Courthouse is a steel framed structure veneered on the exterior by limestone ashlar. The Renaissance Revival character of the building is  displayed by the rusticated stone work and large arch window openings at the first story; smooth stone finish and simple rectangular window openings at the second story; recessed window openings between paired stone columns at the third story; and quoin details at the wall corners. The building is also distinguished by a prominent hip roof, covered by red tiles and featuring wide eaves underscored by press- metal medallions. The design of the 1937 addition is sympathetic to the original.