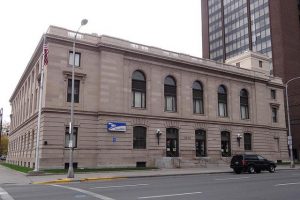 The historic federal building in downtown Billings, Montana was originally constructed in 1913-4. The building was expanded in 1932 and again in 1940, the latter impacting the “rear central and southern portions of the building” and bringing with it an example of New Deal artwork.

NRHP: “The 1940 expansion of the post office, which resulted in the addition of new third floor offices, was first reported on June 23, 1935. Chandler C. Cohagen was selected as the architect for the $200,000 expansion project. Several other Montana cities were included in the appropriation… John Berntson of Salt Lake City completed the construction work in 1940.”

Then the main post office and federal courthouse, the building continues to house federal operations.