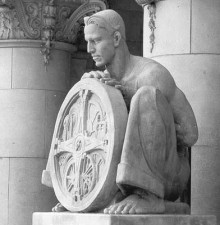 This cast stone sculpture by Donal Hord was funded by the PWAP in 1934. The sculpture depicts a man crouching behind a wheel filled with gears and is variously known as “Man and the Wheel” or “Wheel of Industry” or “Man and the Machine.” The sculpture’s dimensions are 6’8″ height x 5’6″ width x 4′ deep, and the base is 4’h x 5’w x 4’d.

The piece seems to have originally been made for the museum in Exposition Park. It is currently in storage:

“The sculpture was constructed as part of the Public Works of Art Project (PWAP). It may have been the first, of hundreds of WPA sculpture projects created in Southern California. It was Mr. Hord’s first PWAP project. Southern California benefited more than any other region in the U.S. from this federally assisted project. Although the sculpture is owned by the General services administration, it is on permanent loan to its custodian, The Natural History Museum. The museum also owns two small plaster casts of the sculpture.

The sculpture has been moved twice since its original installation in 1934-35. It was moved ca. 1982 from the East entrance to the South entrance of the museum. It was moved to its current location in a storage yard in 1987, apparently after being vandalized during the Los Angeles Olympics.

The sculpture depicts a barefoot, muscular young man in working clothes in a squatting position. He is holding up a large wheel that rests on the ground in front of him. The interior of the wheel is cast in relief, with wheels, gears, and other symbols of the industrial age.

The figure is cast in a beige pigmented concrete, or “cast stone”. He sits on a low pedestal, which is in turn mounted on a large square pedestal. This square pedestal sits on a two-tiered base. It is possible that the base and pedestal were separated when the figure was moved from its original installation.”
– http://www.publicartinla.com/Expopark/wheelindustry_survey.html

Location notes:
The sculpture is now stored at a nearby storage facility.