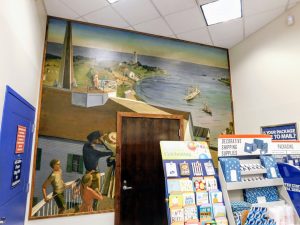 Created for the former Everett branch post office, the mural “Mail for New England” is an example of New Deal artwork. Painted by Stephen Etnier, and completed in 1940, the work has since been relocated to Boston’s Back Bay post office.

Jimmy Emerson: “When the Everett post office building was sold in the 1970s, the mural was removed, rolled up and stored where it suffered water damage. It was discovered in 2005 and restored. It was installed in the Back Bay post office in Boston in 2009.”