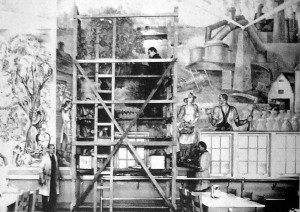 “[Mr. Lenson] moved to Newark and applied at the W.P.A. office on Halsey Street … Soon, Mr. Lenson was designing and executing murals for the state W.P.A. program. He went on to become assistant state supervisor in charge of the other muralists in the agency. …”

The Essex Mountain Sanatorium has been fully demolished; the land on which it sat became part of Essex County’s Hilltop Reservation park.

The mural at the Essex Mountain Sanatorium was Division Federal Art Project No. 1, WPA Project No. 3-289.