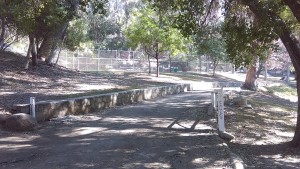 As part of a grant to the Pueblo before it became the City of Los Angeles, Elysian Park is the oldest and second largest park in Los Angeles at 600 acres. A section of the park Montecillo De Leo Politi is a limited use area available by reservation. In 1936, the WPA constructed two tennis courts and two comfort stations there. Under project number 9907, it was sponsored by the City of Los Angeles, the cost was $211,942, and provided 358 men on average per month with employment for 9 months.