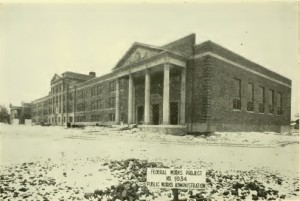 What today is the Elm Street Junior High was the Nashua senior high school until 1975.

In the Town Report for 1936, Mayor Alvin A. Lucier wrote in his summary for the year: “In the latter part of 1935, the City Government accepted the offer of the Federal Government of a grant of two hundred and seventy thousand dollars toward the construction of a new senior high school. That this structure was vitally needed admits of no question. Work has proceeded speedily and efficiently, and we have every reason to believe that the building will be totally completed within the next two months. The school was located on city-owned land at a point nearly in the center of population and in the section of the City in which we may fully expect most of the future building will be done as the City grows larger.”

The school was completed in March 1937.