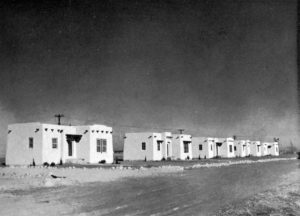 "Public buildings: a survey of architecture of projects constructed by federal and other governmental bodies between the years 1933 and 1939 with the assistance of the Public Works Administration," by Short and Stanley-Brown (pg. 303).

A former set of “Spanish-style cottages,” known as El Pueblo, was created for married students at what was then West Texas [State] Teachers College. The project, built in 1936, was enabled by Public Works Administration (P.W.A.) funds: a $27,400 loan and $11,105 grant.

A 1936 article in the Canyon News newspaper says the cottages were “located on the northeast corner of campus and are situated in a semi-circle.” Satellite imagery shows that the houses were located between Russell Long Blvd. and 2nd Ave.; and east of 26th St.

Michael Brown writes: “Visually,” there are several cottages still extant that appear “identical with at least six (of the original 10) existing structures. Five of them are now in the 1300 block of 2nd Avenue in Canyon, one is near the community of Wayside.”

Short and Stanley-Brown:
“The West Texas Teachers College has adopted this unusual and interesting method of housing its students rather than the customary dormitory. Under conditions of high land values and building costs it would not, as a rule, be possible, but as an exception it has much interest.

Each building provides a living room, kitchen, bathroom, and three bedrooms, and accommodates six students. The rent is $30 per month, or $5 per student if the house is fully occupied.

The foundations are concrete, exterior walls are masonry with a stucco finish, and the balance of the construction is frame. 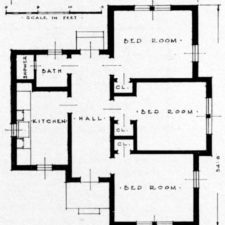 "Public buildings: a survey of architecture of projects constructed by federal and other governmental bodies between the years 1933 and 1939 with the assistance of the Public Works Administration," by Short and Stanley-Brown (pg. 303).