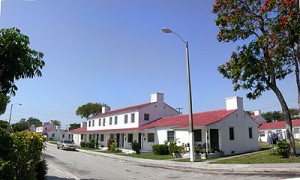 The 345-unit low rent housing project Edison Courts, completed in 1941 and designed by the firm of Paist and Stewart with associate architects Robert Law Weed, Vladimir Virrick and E.L. Robertson, provided public housing for white people. It was similar in scale and design to Liberty Square project, opened in 1937 and designed by the same firm. Both projects were integrated in the 1960s. Edison Courts has maintained most of its historic ambience …”