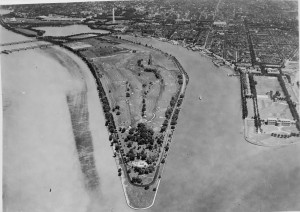 East Potomac Park rests on an artificial peninsula created with dredge spoils from the Potomac River by the Corps of Engineers.  The park opened to the public in 1912 and was largely developed in the 1920s.

After a flood in 1936, Work: A Journal of Progress reported that the Works Progress Administration (WPA) had done “extensive grading and drainage work” to repair flood damage on the “Speedway,” the road circling East Potomac Park.

That same year, Work also reported unspecified improvements conducted by the WPA to the Washington Channel off Hains Point.  That might have included rip-rap along the channel for erosion control, given the flood problem.

In 1942, the Washington Post also reported $30,000 allocated for unspecified Federal Works Administration (FWA) work on the site (probably by the WPA, which was under the FWA by that time).  No further details have been found about this work