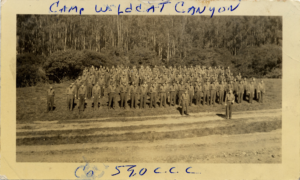 The Civilian Conservation Corps (CCC) set up five camps in the East Bay hills, starting in 1933-34 and carrying on until 1942.  From those camps, the “CCC boys” set out into the newly-created East Bay regional parks to do a wide range of improvements, such as clearing brush, planting trees, building roads and trails, and laying out picnic areas.

The first camp was set up at Wildcat Canyon at the present site of the Tilden Environmental Education (Nature) Center.  About 3,500 young men rotated through Camp Wildcat Canyon.  As Eugene Swartling, who supervised the camp, recalls, “these young men were not being trained as soldiers but as good citizens; to be courteous, neat, and clean. In the evening, various classes were offered for three hours and the CCC men were encouraged to learn a trade.” (Quote from Brechin, 2008)

Camp Strawberry Canyon was at the present site of the UC Berkeley Botanical Garden. It housed 300 enrollees, which may have been a more educated group of young men because they had auditing privileges at the university. They are the one who created the relief maps of the East Bay Regional Park District on the campus.

Camp San Pablo Dam was located near the northwest shore of San Pablo Reservoir. This camp was initially integrated with African American and White enrollees, and historic photographs show racially mixed work teams in Tilden Park.  Typical of the time, White residents of the City of Richmond complained about the proximity of Black CCC men and Camp San Pablo Dam later became all-White (exact dates uncertain). These kinds of racist protests over integrated and Black CCC camps were commonplace around the country.

Camp Grass Valley/Lake Chabot was located just east of the present Lake Chabot Municipal Golf Course, along the Goldrod Trail, in what is now Chabot Regional Park (created after the Second World War).  This group worked on the golf course and around the future Chabot Park area.

Camp San Leandro Lake was located on the east side of San Leandro Reservoir on watershed land of the East Bay Municipal Utility District.  This was a solely African American camp. Those enrollees probably did work in Redwood Regional Park.

For more on the work performed by the CCC enrollees in all the camps, see the various project pages for the East Bay Regional Parks, Tilden Park, Temescal Park and Redwood Park, plus Lake Chabot Golf Course. 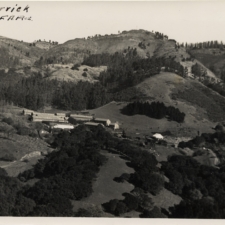