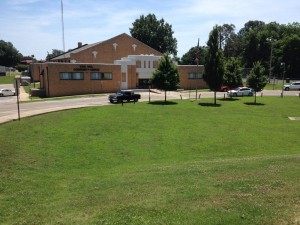 Constructed in 1935-1936, the Community Center #1 (later renamed the Earl Bell Community Center) was a civil building in Jonesboro. Jonesboro architect, Elmer A. Stuck, designed the building that cost $100,000 (of which $45,000 came from the Public Works Administration, and $55,000 from a bond issue). The Community Center #1 is a single story building with buff brick walls on a continuous concrete foundation. It has a gable roof located in the center, with flat roofs on the east and west sides. With several changes through the years, it still features the art deco architecture. It has numerous Art Deco style elements on the main façade, including smooth, white concrete projections and towers

The center originally served as a gym and civic center for the community. The Jonesboro Young Men’s Civic Club came up with the idea to request federal funds for the construction of a civic center, community pool, and golf course. They received the funding for the civic center and pool, but not the golf course. The center opened at the end of October 1936, and hosted over 20,000 people for the Craighead County Fair. Since then, performers such as Elvis Presley and Roy Orbinson, along with professional wrestling, have performed in the building. After the May 15, 1968 tornado that killed 35 in Jonesboro, the city used the building as a temporary morgue. After the 1984 Olympics, the city renamed the facility, the Earl Bell Community Center after the 1984 bronze winning Olympic pole vaulter, a Jonesboro native. The Center was listed on the National Register of Historic Places in 2008 for being a Public Works Administration Project, an entertainment and recreational facility for the community and for its Art Deco Style.