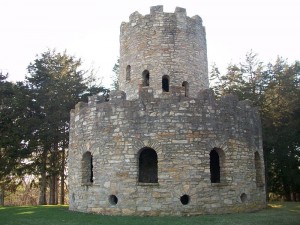 Not to be confused with the park of the same name in Dubuque, Iowa, the WPA did extensive work on Eagle Point Park from 1935-1937. Workers deepened and widened Battle Creek, built trails and footbridges, and constructed many stone structures in the park:

“Overlooking the Mississippi River and General Zebulon Pike Lock and Dam (No. 13) are the 164 acres known as Eagle Point Park. Visitors are provided with spectacular views of the river and parts of Illinois, and Iowa. Shelter buildings constructed from native stone are available by reservation. The park offers many more amenities, such as: picnic tables, barbecue grills, tennis courts, wading pool, viewing towers, playground equipment, horseshoe courts, and a band shell.

Situated in the northern section of Clinton is one of the best assets of our fair city, beautiful Eagle Point Park well-maintained, unusual and very delightful.

There is a stone look-out tower that the locals refer to as the “Castle”.  Kids have played in and around it for years as they crawl in and out of the lower holes or jump out of the windows which are 4 feet off the ground.  The Castle has a spiral stone staircase winding around twice before it reaches the top of the building.  It was built by the WPA along with two bridges, a recirculating waterfall and a stone staircase which goes down the bluff although part of the stairwell is now gone since the bluff has fallen away somewhat.  There is also a wooden lodge that was built by the WPA.”   (http://www.iowabeautiful.com)