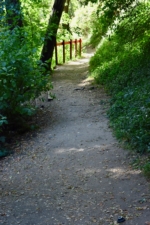 The Works Progress Administration (WPA) prepared the way for Dimond Park in 1936, in coordination with the Oakland Parks Department.  The relief workers cleared trees and brush from the steep Sausal Creek Canyon before constructing the Recreation Area, reworking the creek bed and building trails.

In late 1935, the WPA approved $38,000 for this project out of over $1 million allotted for various works in the city of Oakland.

One local resident complained bitterly about the clearance in a letter to the Oakland Tribune (1939), condemning the WPA work: “With a ruthlessness that would have shamed a horde of vandals they cut and slashed and hacked and slew…. Compared with what was there before, they left a desert behind them.”  The writer makes no mention of subsequent improvements made for public use of the area.  This is an example of the long-standing conflict between preservation and recreation in American parks, with valid arguments on both sides but often tainted by a class divide over the best use of open space (Maher 2007).